Why is Howard Sew Happy?

In the African Vision of Hope Empowerment Center on any given day you will see a young man bent over a sewing machine, a huge smile on his face while he gives it a tune-up. You would never know that 21-year-old Howard has not always had a reason to smile.

Growing up, Howard and his 5 siblings lived in the village of Chongwe in a very poor family. Their parents were small scale farmers, and when their father died at a young age, their mom raised them by herself. This troubled Howard, so at the young age of 13, he joined a group of men digging sand for building purposes. The work was hard, and the distance to the worksite was far, so he used to camp in the bush with the other men, making 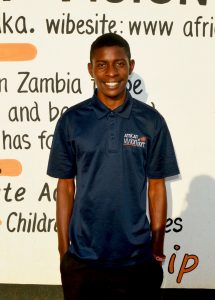 shelters and sleeping on the ground. He says “I was abusing [poor living conditions, excessive labor with few meals] myself, but I never had a choice. I had to help my family and myself.”

He started helping his mom by giving her some of the little money he earned digging sand. Seeing his mother’s smile when he shared his money gave him happiness and courage to work more. His family never worried about him, even when he would be gone for months at a time, because they knew he would come back and help them. Howard was going to school in the same town where he dug sand, but he could never concentrate because his main goal was to make money, not go to school.

While in school, he developed an interest in sewing machines. In 2016, a mission team member visiting Zambia taught Howard how to repair the machines, and after graduating, Howard started working for African Vision of Hope repairing the Empowerment Program’s sewing machines and assisting the child sponsorship coordinator.

Howard says “I am really humbled to African Vision of Hope and so thankful for what you have done upon my life and many others. May you continue helping and praying for us. May our God keep you united in the days of your lives always and thank you so much for giving the hope I have today. I am a proud Zambian and I am a future Engineer. I want to be the best. I love you all so much.”

Howard’s dream is to go to engineering school, but he cannot do that without a scholarship from YOU!