James survived child labor, being beaten nearly to death and many other forms of abuse. He had no one. Now he is their protector.

James watches as the last of the students leave school for the day. He smiles and waves to Evans and Likonge, two of the children he counseled today. Newly enrolled, Evans has no shoes and his mother struggles to provide food for him and his siblings. Likonge is being abused and beaten by his step mother.

He knows exactly how Evans and Likonge feel. He knows the feeling of helplessness and hopelessness. As a Child Protection Officer at the African Vision of Hope school in Kafue Zambia, James sees children facing the most challenging and heartbreaking situations.

He wants each child to feel God’s love through him. James knows how important it is for a child to know they have someone who is watching over them because he did not have this for most of his own childhood.

When James’ mother passed away when he was 13, an already challenging life became nearly unbearable. Their village of Chamuka, located in the Central Province of Zambia, was far from schools, markets or even water sources. His mother was the pillar of the family, and provided for him and his five brothers and sisters through the small business she operated. Following her death, money stopped and the family struggled to buy food and basic necessities.

To add to the despair, James’ father not only didn’t work, but he used what little money the family had for alcohol and quickly became a drunkard.

“He did not care whether we had eaten. I couldn’t watch my brothers and sisters starve, and that forced me to start doing piece works such as watering people’s gardens, burning charcoal and going around neighboring fields picking remaining kernels of corn.” – James

When there was no money for food, having money to pay school fees seemed like a distant dream. James was chased from his community school for not being able to pay the 15 Kwacha for his tuition, which is equivalent to less than $1.

A Big Weight on Small Shoulders

One day, James came home from his piece works to find the family’s small thatched home burnt to the ground. An unknown person had set fire to his home and the very few things they had were lost. At 13, James had no clothes, no shoes, no food to feed his family, and no adult watching over him to help provide assistance.

“This was one of the most difficult situations I faced. I was going around the community asking for Mealie Meal and different types of food so that we can eat or have clothes to wear. I will never forget this time. This was the moment my father wanted to commit suicide because of the hardship we faced as a family. We became the laughing stock of the village.” – James

At such a young age, James felt overwhelmed and hopeless. As the oldest of 6 children, and knowing his father did not care whether they survived, James knew that education was his only hope to get the family out of poverty. It was all on his shoulders. He decided at that moment to do whatever he could to educate himself in order to provide a better life.

James reached out to an aunt to stay at her home and return to school. His mother’s sister lived 97 kilometers away, and she agreed to help. In his aunt’s home he found peace. She was a good and loving woman, and he felt for the first time in a long time that he was loved and cared for. But this was a brief respite from the trauma of his life. In less than a year, and on the very day James began writing his grade 7 examinations, his aunt passed away unexpectedly.

Again James was homeless. He knew if he went back to be with his father, there would be no hope for an education. He began staying with school friends and extended family members. However, he was not treated with warmth. He faced many forms of abuse during this time including beatings, whippings, food depravation, and forced child labor. Several times he was sent to even more remote areas to sell vegetables and earn money for the family with which he was staying.

Balancing these challenges and maintaining a focus on school often conflicted in painful ways. While living with his aunt’s daughter’s family, he was sent far away to go sell vegetables on the same day he was to take an important examination at school. Instead of going directly to sell the vegetables, he first went to school to take the test. That night when James returned home, he was attacked by his cousin’s husband. He was punched, kicked, and beaten until he was near death.

He felt overwhelming pain throughout his body. He had no one to turn to. There were only two homes in the area. The one where he was staying and a neighbor’s house, and neither were going to provide any assistance. He felt betrayed. Betrayed by his family, and betrayed by his friends. It was his school friends who had told his cousin that he had gone to school for the test instead of to sell the vegetables.

“I would cry myself to sleep each night. I felt alone and in darkness.” -James

In a time like this, when many would question God as to why these painful challenges would be put in their life, James remained focused on his purpose. He would continue to pursue his education and build a better life. He just kept going.

For two years James moved from house to house suffering abuse and neglect, but he kept pursuing his education. His marks in school remained high, and he passed his grade 9 exams. But it was at this point, he reached an impasse. He could not afford the increasing school fees.

Hope for the Hopeless

He made plans to move to Lusaka, the capital of Zambia, and seek work as a security guard for a newly built mall. It was when he was sharing these plans to raise money for his school fees with a cousin that he was told about African Vision of Hope.

In 2013, he applied and was accepted. He was provided books, a uniform and a hot meal every day.

“It was a joyful moment in my life. It was the first time I did not have to constantly struggle to find ways to earn school fees or meet the demands of others in order to be able to attend school. It was the first time I didn’t have to worry about where my next meal would come from. I felt loved, blessed and relieved from self-sponsorship after so many years of struggling.”- James

“I was so happy, though I was alone that day. There was no family to congratulate me. But the time I walked in front to collect my certificate of completion, I was in tears. I guess it was the tears of victory.” – James

James’ education was not over yet. In 2017, James received a scholarship through African Vision of Hope to attend college. He majored in Teaching, with a focus on English and History. Due to COVID-19, James graduated with his degree in 2021.

“Thanks to African Vision of Hope for giving me a vision, hope, a bright future, and empowering me with a job.” – James

From Powerless to Leader

Through your help, James completed his education and is now able to help his family begin to move out of poverty. In his role as Child Protection Officer and teacher at African Vision of Hope school in Kafue, James’ day is filled with opportunities to counsel and help the children.

“Through my pain God gave me a gift. I can sense very intensely the weight on the shoulders of these children and the pain they are feeling. Just by looking at them I can sense this. I can feel the fear and hopelessness in their hearts. I want them to feel safe, loved and protected.” -James

The children at the Kafue school feel safe and comfortable with James. They share things with him they do not feel comfortable sharing with others. He is humbled to be able to provide this security and warm outlet in their lives.

“When I counsel children, I tell them a brief story of my life. Through my story they are encouraged because I have been through the same things they are going through right now. I am able to be a living example for them, provide them with vision and give them hope.” – James

James knows that God put him through these challenges to equip him to help children like Evans and Likonge. There have been so many moments when God has placed him in the exact right spot to help, or connected him with a child at the perfect time in their life, leaving them astonished at the love God has for them and how God is present in their lives.

“God has placed me here for an important reason. Throughout my life, he placed me in painful situations that I now know were designed to equip me to help others. Through this pain, there is joy and glory to God.” – James

You rescued James, and now so many others are being rescued and know God’s love through James. This is an investment with an eternal impact.

“Blessed be the God and Father of our Lord Jesus Christ, the Father of mercies and God of all comfort, who comforts us in all our tribulation, that we may be able to comfort those who are in any trouble, with the comfort with which we ourselves are comforted by God.” 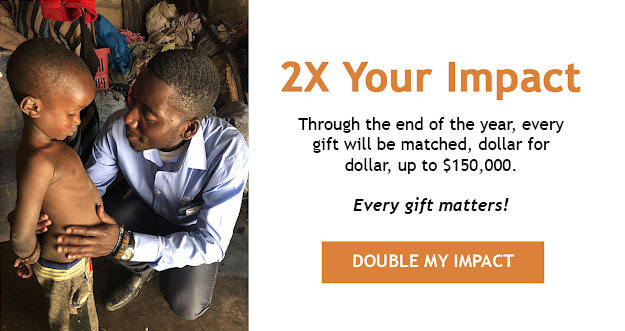