A Page Flipped to Hope

Paul Kasongo became an orphan at the age of seven. Homeless and left on his own he began working on a farm as a child slave, unable to go to school or have a dream for his future.  At eight years old Paul ran from his situation at the farm, desperately searching for somewhere else to turn. Paul began living on the streets, surviving off of only what little scraps in the trash dump he could find. He lacked food, shelter, clothes, and an education, and his future was looking even more discouraging than it 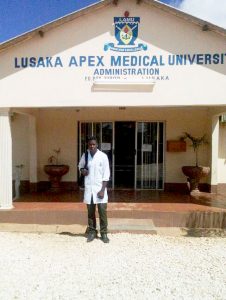 had before. He sold cabbages on the streets to try and earn some money for school, but he could only barely make enough to buy food to survive through the next day. Each day became more hopeless than the next and a future without an education would continue to be this way. That was until he heard of African Vision of Hope, a free school where he could turn his situation around.

“I broke out in tears of joy”, Paul told us. “I had never thought I would find such a wonderful place of peace. African Vision of Hope Christian School was a page flipped from no hope to hope, both spiritually and academically. I was given an education and a place to live in the orphanage. I now believe that Jesus is Lord. I was able to chase after my dreams and career until one day I know it shall become reality.”

Paul graduated from school in 2015, and was awarded for being among the best students. He applied to be a surgeon this year at Apex Medical University in Zambia and was accepted into the medical and surgery program. “When I finish my studies I want to become a neurosurgeon,” Paul told us. “I want to help the people of Zambia, Africa, and the world at large. African Vision of Hope provided me with a full scholarship to continue in my studies. I would like to say my appreciation for all the support I have received – financially, spiritually, intellectually, and emotionally. Thank you for supporting both myself and other vulnerable children in Zambia, and may the Lord bless you.”

You can be a part of a college student’s success story. By sponsoring a student to go on to higher education, you are preparing them for a bright future of changing their communities and country at large.

Give a gift that keeps on giving