Charity is the youngest of three siblings and was blessed to have a mother who always looked over her with love and provision. However, once her father left and refused to support his family, life became unimaginably burdensome.

Even so, her mother saw value in educating her children and managed to ensure Charity and her siblings were enrolled in school. Charity’s mother knew how bright her daughter was and had confidence she would do well in school. When news surfaced to Charity’s father that she had earned some of the highest marks in her class, her father was proud and wanted to have Charity live with him in a nearby community.

Charity’s mother declined the request as she feared what this new living arrangement might bring. Unsatisfied with the answer, Charity’s father kidnapped her and took her back to his home.

As the months progressed, Charity was abused and mistreated in her new home. Yet despite these extraordinary challenges, Charity was resilient and her grades remained the highest in the class. Eventually, her father agreed it was a bad idea for her to live with him and sent her home to her mother.

However, when Charity returned home to her mother, she found the circumstances were more challenging than before. Her mother was struggling with her health and finding it hard to earn enough money for the family. The urgent need for food and shelter took priority over paying school fees.

Charity’s education was at risk, and the path to her future seemed bleak and hopeless. She was ready and desperate to begin grade 9, but education money was unavailable. 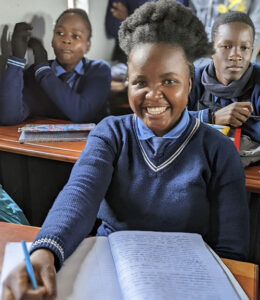 A Future So Bright

One day, Charity’s brother learned about African Vision of Hope. The idea of a school providing a free education was inconceivable to Charity. Despite her disbelief, she was quickly enrolled in grade 9.

“I started school at African Vision of Hope, and I received the best education here.”

Today, Charity is finishing the 12th grade and will graduate at the top of her class. Without your support, Charity would have never been able to realize her God-given potential. Not only has your faithfulness provided her an education, but now her path forward is bright and full of hope. You can continue to be a part of Charity’s story by praying for her as she pursues her education, and by supporting more students like Charity. 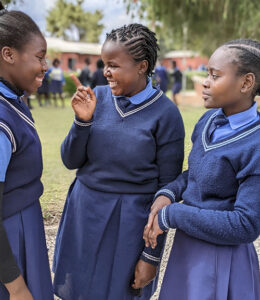 “When I grow up, I want to become a medical doctor to serve people’s lives and help my mother out of extreme poverty. I want God to bless the African Vision of Hope for offering me free education, free books, a free uniform, and free food. I am working hard to pass my grade 12 exams so I can go to university and become a medical doctor. I want to say thank you for giving me the opportunity of sharing my story and dream. May the good Lord continue blessing African Vision of Hope.”